In the 19th year of the Tensho era (1550), Shingen Takeda of Kai attacked the Shinano country in the Matsumoto region, under the reign of Nagatoki Ogasawara. Nagatoki offered the Hayashi Castle (near Iriyamabe of Matsumoto city ) as a sacrifice, and visited Murakami in the Northern Shinano.Nagatoki did not want his enemies to ruin his white peonies, and placed his hopes in the hands of the temple master of Tosen Temple, a praying site located in Satoyamabe.Since then the Kuneshita clan, the patrons of the Tosen Temple, continued to protect the castle lord’s white peony for generations. 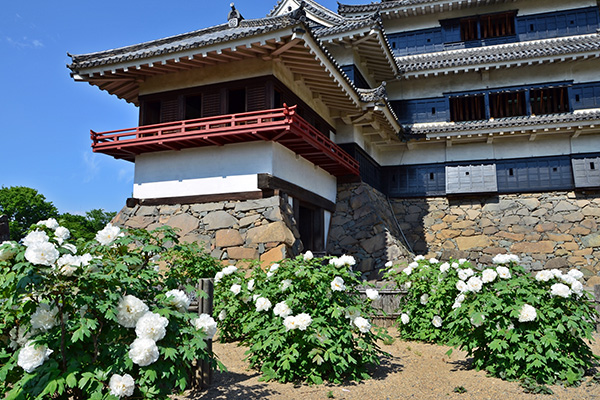 In the Showa era, the descendant of the Kuneshita clan told this story to the 16th head of the Ogasawara clan, Tadamune Ogasawara, Tadamune was very thankful.And so, after 400 years, the white peonies returned to the garden inside the main enclosure of a castle; this castle was the supporting castle of Hayashi castle, Fukashi Castle which is now called the Matsumoto Castle. The same white peonies bloom beautifully even today.