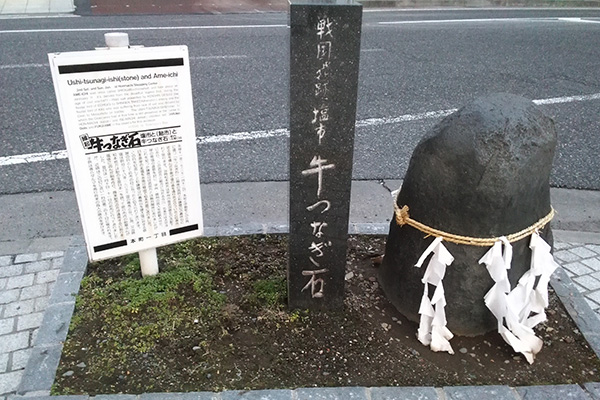 There is a stone of height 70 ~ 80cm at the corner of intersection in Matsumoto Honcho 2-chome(present name is Chuo 2-chome). This stone is called the cow tie stone.

Cow tie stone does not connect the cow. When the road of castle town was maintenance, Dososhin(God to protect the people who go the way) was transfered Tsuji to “Ichinotsuji”. Also Ichigami (Ebisu-sama) was transfered to the same “Ichitsuji”. And salt was sold on 10th and 11th lunar January at that Tsuji. “Shio-machi” has been started from here. It was the beginning of Edo era.

After that, following topic came to Matsumoto. “Mr.Shingen Takeda had been hostile against Mr.Imagawa in Suruga(present Shizuoka prefecture) and Mr.Hojo in Sagami(present Kanagawa prefecture).” Mr.Imagawa decided not to send salt by corporation with Mr.Hojo to the southern and middle area of Shinano (present Nagano prefecture) managed by Mr.Takeda. Kai(present Yamanashi prefecture) and Shinano cannot get salt because of no sea. Farmers and towns people were suffered. Mr.Kenshin Uesugi in Echigo(present Niigata prefecture) sent a lot of salt from Itoigawa(present located in Echigo) to help them, even though he was an enemy of Mr.Takeda.

When this topic came into Matsumoto, people said what Mr.Uesugi Kenshin sent salt was told as “Shioichi(=salt market)”, and Dososhin is a stone connecting with cow of delivering salt.

Latter period of Edo, people offered candy whose shape is staw bag with salt in front of God and name was changed from Shioichi to Ameichi(=Candy market) because people sold the candy and Dharma doll as talisman in the end of the Meiji. It is now going on, and bustled from now on.