The legend of the Sodetome Bridge (Midori Bridge)

Between the 5th section of Honchou City and Bakurou City, there is the Nagasawa river. On the river there is a bridge called the Midori Bridge. The name Midori Bridge was given to this bridge when it was reconstructed in 1878 (11th year of the Meiji era). Before that it was called the Sodetome Bridge.

Hidemasa Ogasawara, the castle lord in 1615 (the first year of the Genna era), first departed for the war in Osaka; his two sons Tadanaga and Tadamasa followed a little while later. Hidemasa, the younger brother, was still very young, and was wearing a Furisode Kimono under his armor.

His mother felt an agonizing feeling when she had to send out her son to war, thinking, “Hidemasa is too young. I don’t want him to die in battle. It breaks my heart to think that I will never see his face again.” She eventually leaves the castle to follow Hidemasa. She caught up to him just as she arrived at the Nagasawa river. 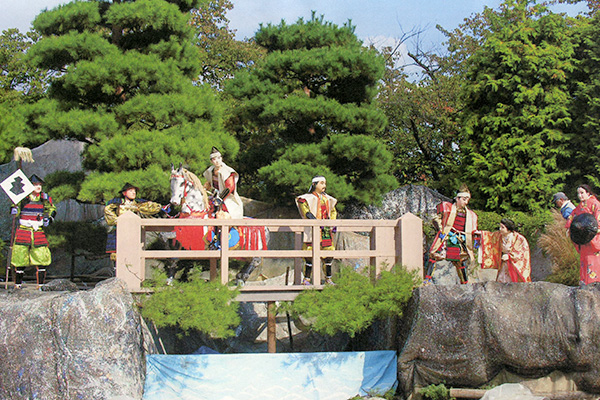 She pleaded, “Please do not go,” and grabbed Hidemasa’s sleeves. She made sure not to let go easily.Hidemasa became sentimental as she hung onto him, and the two were reluctant to part from each other.But Hidemasa exclaimed, “I must go,” and along with his mother’s feelings, he shook her off of his sleeves and went off to fight.In the hands of the mother were the sleeves of Hidemasa’s Kimono.This is the reason why the bridge’s name is the Sodetome bridge (the sleeve pulling bridge).