Learn about the castle town Matsumoto 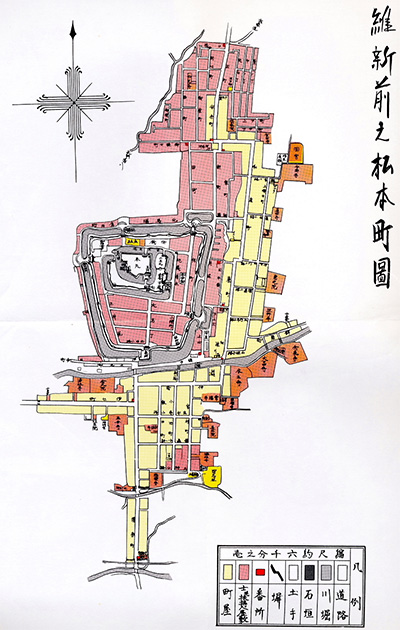 Matsumoto is the castle town spreading vertically from north to south. The town is divided into the north and south parts due to the Metoba river flowing right through the town center. In the north part, there are a castle and the residences of samurai warriors, while there is a town for merchants in the south. The residential area for merchants spread out vertically along the Zenkō-ji road and is divided into three parts called “Oyamachi-Sancho,” “Edamachi-jiccho” and “Niju-yon Koji” respectively. There are temples and shrines from the east to the south outside the residential area, used as evacuation sites in the case of emergency.

The main road in this castle town is the Zenkō-ji road (Hokkoku-nishi road) running from the north to the south. It is connected with the mountain roads from the east, from Hida area located in the west, and from Itoigawa city.

It is said that Ishikawa clan placed Juodo where Juo and Jizo are enshrined to protect the entrance of the town.

The castle town expanded to the north, south and east except the west.