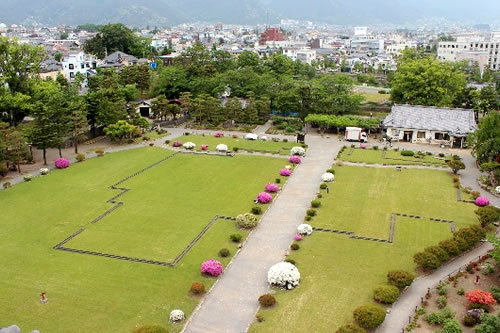 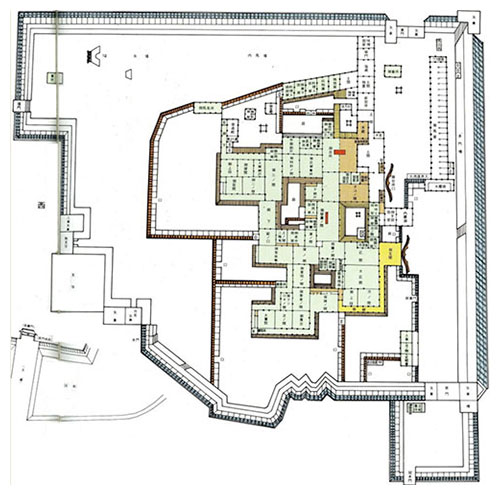 Honmaru Palace was once located within the area partitioned using roof tiles in the Honmaru garden.

Figure below on the right is a restored layout of the Honmaru palace. It consists of 5 main buildings, a total of approximately 60 rooms, the floor area is approximately 2,730 square meters. A long fence is running around the perimeter of the palace and it divides the palace from the Keep in the west, and Uchibaba in the north, respectively. It is estimated that the palace had been built at the same time as the Keep. It was used as the domain’s administration office and also a residence of the lord. In 1927, which was a leap year new year, it was burned down by a fire.

The lord then was Mitsuchika Toda, who was moved from Toba in 1726, just a year before the fire occurs. The palace was never rebuilt after the fire, and the place of administrative affairs was moved to the Ninomaru palace. 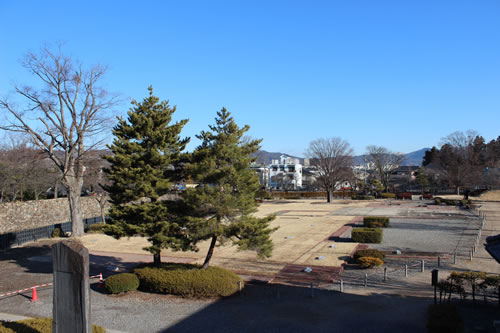 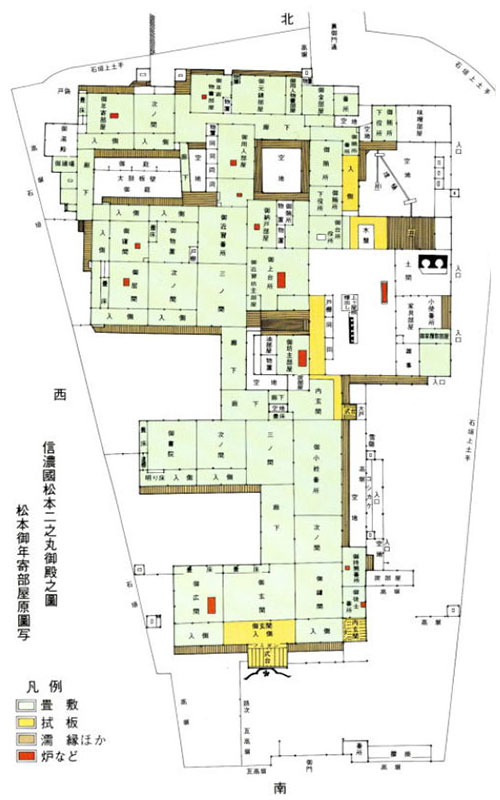 The formal entrance of the Ninomaru was located on the south center, consisting of a stand-by room and front doors. Also an inner entrance was located almost in the center on the east side. Entering the Ninomaru place through the stand-by room, there was a room on the left hand. Behind the room, there was a reading room and other rooms attached to it. The size was smaller than the Honmaru Palace, but the layout was same as that of the Honmaru Palace. In the Honmaru Palace, behind of which, offices for administrative affairs were placed, while in the Ninomaru Palace, there were private areas for the head of the domain here, and behind these areas, offices for administrations were placed. Administrative offices include rooms for high ranking officials including elders, stewards and secretaries thereof and other personnel.

The kitchen was spread to the northeast side of the Ninomaru palace, and there were a water well taking advantage of underground water, and a reservoir to keep water drown from the well in Jizou Shimizu district through a gutter.

In the Meiji Period, the Ninomaru Palace was used as Chikuma Prefectural Office, but a fire occurred at 3:30 AM on June 19, 1867 and the entire building was burned down. In 1979, a research excavation began and the Ninomaru Palace ruin were restored on the plane, and now they are open for public viewing.