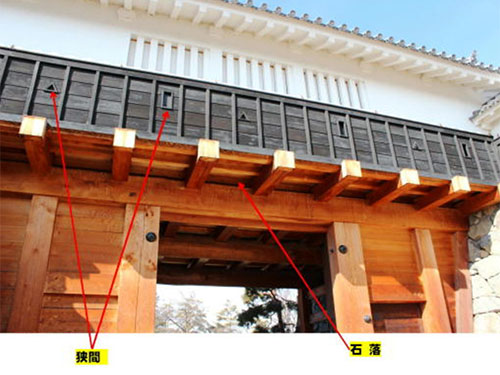 Taiko-mon is the outer gate with walled compound. During the Edo period, it had been used as a warehouse. It was taken down in the early Meiji Period. In 1991, an research excavation, and subsequently, in 1992, the restoration of the stone fence were completed. In 1999, the Taiko-mon (Drum Gate) was restored by scraping the pillars into the size that match the shape of the foundation stone. For the pillars, 400 years old Japanese cypress, and for the beam, 140 years old pine are used.

Construction period of the Drum Gate is not clear, but it has been believed that the gate had completed by the Ishikawa clan’s era. Gilt ceiling tiles were unearthed from the west of the gate foundation, south stone fence, which have been exhibited in the City Museum.

Stone dropping windows are placed on the floor, on the west side of the gate. In those days, the gate was usually open at 6:00 AM and closed at 6:00 PM.